The illegitimate son of Yone Noguchi, a Japanese poet, and Léonie Gilmour, an American writer who edited many of Yone Noguchi's works. [1] The latter, however, shortly after Isamu's birth, decides to cut off the relationship with Gilmour, with the intention of marrying a Washington Postreporter, Ethel Armes; He later learned of Léonie and their son, so Yone's last relationship failed in a few months, when he had already returned to Japan and was waiting for her to marry her. At this point she decides to return with Gilmour, inviting her to live there with him with their son; He initially refused, only to reconsider the invitation and leave, in 1907, to Tokyo. [1] Only when they arrived, was the child finally given the name Isamu (勇, "courage"). However, in the meantime Yone had found a wife in Japan, so he was almost always absent in Isamu's childhood. After yet another separation, the two moved several times to the land of the Rising Sun, until in 1912, in Chigasaki, his sister Ailes Gilmour was born, to an unknown father, destined to become one of the most important American dancers of the 20th century. In 1918, Isamu returned to the United States, indiana, to study at Rolling Prairie. He then moved to La Porte High School and graduated in 1922. [1] He became an assistant to the director of the Leonardo da Vinci school in New York, his interests began to turn to sculpture, so much so that, in 1927, he won a scholarship to the Solomon R. Guggenheim Foundation,which took him for two years to Paris to study with Constantin Brâncuși. [2] After this experience, he traveled to China and Japan studying the "art" of Zen gardens and experimenting with ceramics and calligraphic drawing. [3] He first exhibited in New York in 1928 and again in Japan in 1930; [3] However, the first major commission did not arrive until 1936, when its History of Mexicowas erected in Mexico City, a colored concrete wall, also embossed with some of the most important symbols in modern history (from the Nazi swastika, to the E-mc2 equation). [2] Beginning in 1935, she collaborated several times with American dancer and choreographer Martha Graham on the sets of her creations. In Mexico, in the 1940s, he was a guest of his friend Wolfgang Paalen, with whom he shared an interest in the ancient Olmecs civilization. 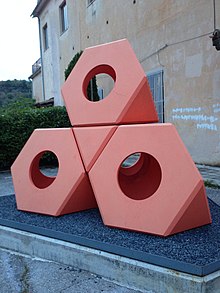 In 1968, on the occasion of the 11th Festival of Two Worlds, in the wake of the success of Sculptures in the city,an open-air exhibition in Spoleto, he wanted to offer the city a proposal of his own, entrusting architects Buckminster Fuller and Shoji Sadao with the realization of his project,Octetra,a children's game and at the same time a work of art, in concrete painted red.

In his lifetime he received numerous awards, to name a few: first prize at the Art Institute of Chicago (1959), honorary degrees from Indiana University (1971) and the University of Southern California in Los Angeles (1974); [3] a member of theAmerican Academy of Arts and Letters and the Architectural League of NewYork. [3] In 1985, the Noguchi Museumwas inaugurated,[3] it was dedicated to the Venice Biennale in 1986[2] and in 1988, the year of his death, he was awarded the third order of the sacred treasure by the Japanese government. [3]

wishlist
Compare
Back to top 